What is club volleyball?​ 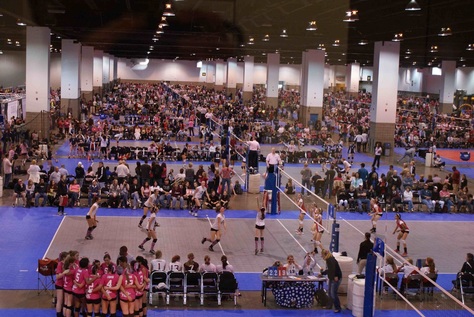 Ever watched the USA’s women’s national volleyball team play in the olympic games?  Almost every one of those women got their start in “Club” volleyball by the age of twelve.  The majority of their training until they entered college came from their club.  And most were recruited to play college volleyball after being seen by a scout at a major USAV sanctioned club tournament.

Of course, those same players also played for their respective High School Teams and were proud to represent their school and community.  But the school season is comparatively short.  With lots of matches packed into about ten weeks, the high school season is simply not long enough to allow players to master individual skills.  Club is where the majority of that development takes place.

“Club” is the common reference to the juniors division of USA Volleyball (USAV) which is made up of thousands of local volleyball clubs like Mesa Juniors. The club season starts in November and ends with the USAV Junior Nationals in July (though our local club season will likely end in April).  Teams practice two or three times per week then compete in various tournaments around the region.

Mesa Juniors Volleyball Company, like most clubs, is comprised of several teams classified according to the maximum age of the players.  MJVC has teams ranging from 12’s (usually sixth graders) on up to 18’s (usually high school seniors).  Our Club is divided into two Divisions.  The 12’s, 13’s and 14’s teams comprise our Middle School Division, and the 15s, 16’s, 17’s and 18’s make up the High School Division.

Each team has a professional coach dedicated to that team.  Some will also have assistant coaches.  The High School Division competes in local, regional, and national tournaments.

The Middle School Division teams practice, usually twice a week, then play in a series of four tournaments against other area clubs.  The tournaments are held locally.  Some of the more advanced teams may also play in additional local, regional, or even national tournaments.

All of our teams are USAV sanctioned under the RMR region of USA Volleyball.

Spirit of Cooperation
We believe that it is best for the player when a spirit of cooperation, not conflict, exists between their club training and their high school experience.  We respect the efforts of their school coaches and seek to instill this same respect in our players.  We want to aid the work of the schools by developing well-rounded players who can fit into any system.

Multi-Sport Friendly
Many studies have shown that it is healthier for kids to play more than on sport.  While we will want our athletes to be committed to their volleyball training, and while it is difficult on us as a club when we face conflicts in our athlete’s schedules, we still want what is in their best interest.  We will not tell athletes that they must choose volleyball over other sports they love.

Early Start/ Good Start
We believe that a key component to the betterment of volleyball in western Colorado is that we need get kids started earlier and give the youngest kids the best coaching.  We have developed an innovative program to teach volleyball to beginners as young as eight which we call MiniVolleyball.  The goal of this program is to get kids to love volleyball and to give them a sound and healthy base of fundamental skills.  In addition our beginner level 12’s teams play a modified version of volleyball called Maxiscore which makes the game playable and enjoyable.  We pride ourselves in the development of young players.

All of our coaches and all of our players, including our 12's-14's are registered with USAV.  This means that they are able to play in USAV sanctioned tournaments such as Colorado Crossroads or the RMR Showdown.  We think an important part of the development of our more advanced middle school teams comes in their exposure to this sort of high-level competition.

Professional Coaches
All of our coaches have other jobs and coach because they love the sport of volleyball.  Most of our coaches have either played or coached or both at the collegiate level.  We strive to keep our club competitively priced and affordable.  We hire coaches rather than just ask them to volunteer or help us out.  This means that we are able to hold our coaches accountable for their performance and instill in them a sense of professional pride and work ethic.  We have professional coaches because we think of ourselves as a professional club.  We have clients and a product, and push ourselves to constantly improve our performance.

We hope that you will consider entrusting Mesa Juniors with the training of your young athlete.